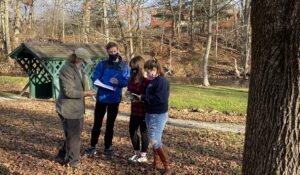 The West Bridgewater Public Library on Howard Street is far more than your average library. Many local patrons come here because they expect we have everything a library should- a serene and intellectual environment. What most of the public does not know, however, is that this library has an environmental awareness group within.

The G.R.E.E.N. team (as we have come to be known) acknowledges our environment – and by extension, educates the public. What does this look like, may you ask? For one, the G.R.E.E.N team has set up a video contest focusing on what it means to be environmentally conscious. On top of that, we have gone to War Memorial Park and calculated just how much carbon some significant trees could absorb. The largest 15 trees in the park can absorb a total of 17618 pounds of carbon per year! Simply put, that is reversing the environmental hazard of 16,511 showers per year; or replacing two cars worth of toxic missions per year! The benefits of breathing in cleaner air are truly tree-mendous! For starters, breathing cleaner air reduces asthma, cardiovascular diseases, cancer; ultimately, making you live longer and healthier. Who does not want that?

The next time you are at the library, stop by! We have much more than just books. 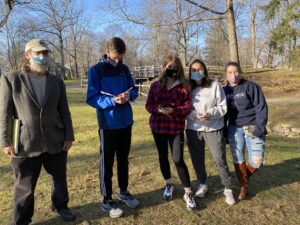 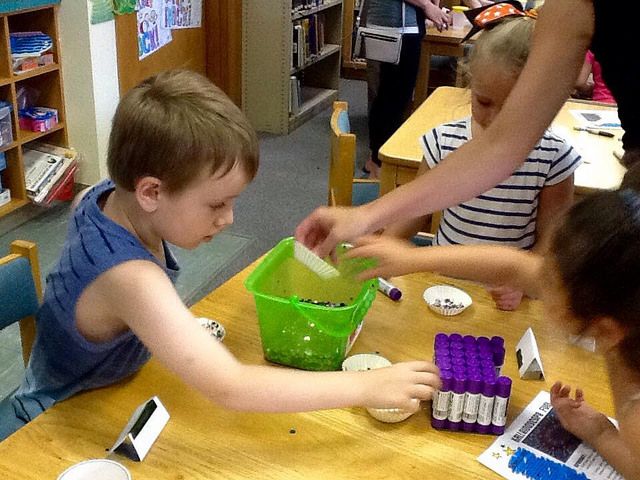 Today with the assistance of the Easton Children’s Museum, our S.T.E.A.M. scientists learned about vibrations, absorption and variables. They discovered the different aspects of sound and light waves. Shadows and colors were investigated. Light was used to see if objects were translucent, opaque or transparent. 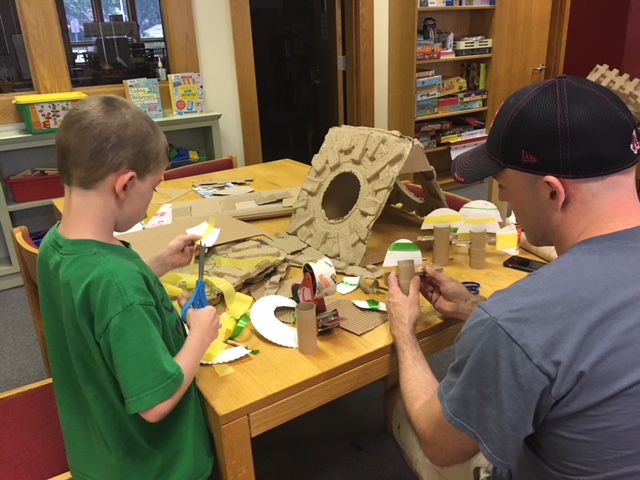 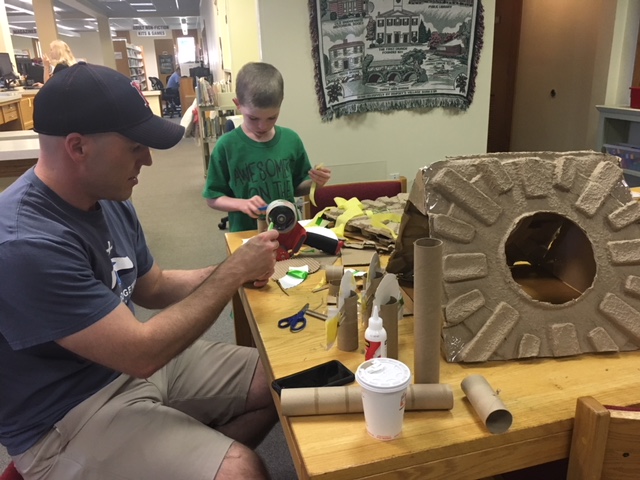 Today our Cardboard Construction Engineers made a bunch of creative, fun items.  A cat cave, a throwing game and a Star Wars world were all created using recycled cardboard found here at the library.  What could you make using cardboard found at home?  Send us your pictures and we will post them to this entry! 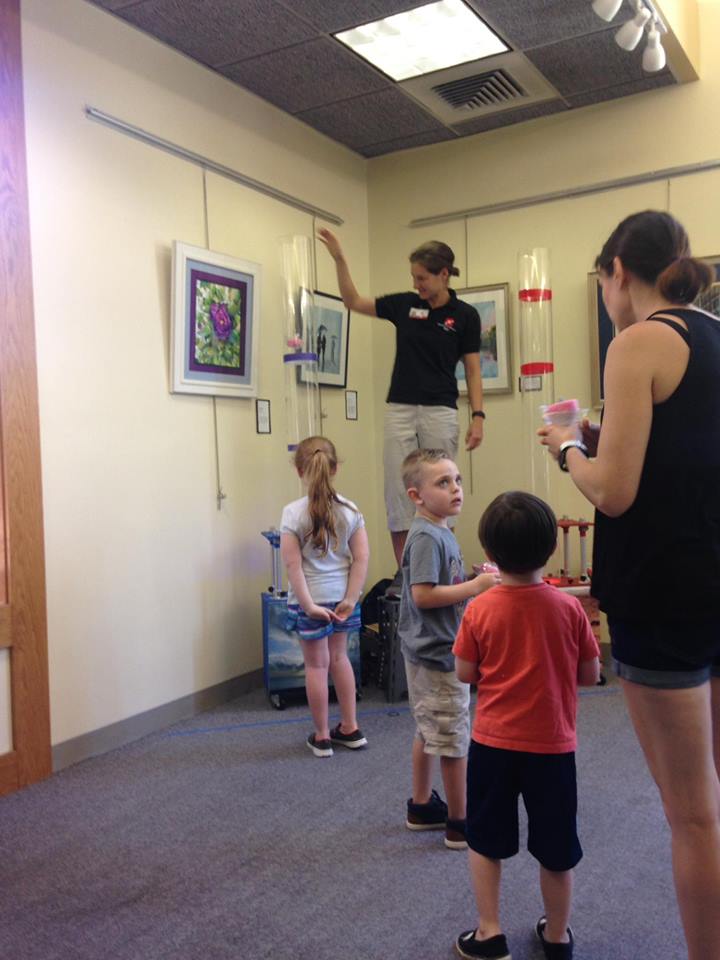 The Museum of Science presented Rockets: There and Back Again, a  workshop in which participants engineer, launch, and return vehicles for an imaginary space journey.  Participants created their own air rocket which was launched across the room, followed by building a re-entry vehicle with common items to test in an air chamber to simulate whether or not their rocket would return to Earth. All of our participants enjoyed being rocket engineers with the Museum of Science!

Our Engineers explored mini zip-lines, ping pong ball catapults, exploding popsicle stick snakes, Rube Goldberg machines, mechanical doodads, and more today with presenter Jay Mankita. Even the adults were amazed by the simple machines that can be built with items that you have around the house. As he told our participants, “start with your goal, and work your way backwards. Keep each part simple. Obey the laws of physics. Have fun!”

Our “deconstruction” experts proved once again that they are willing to accept the challenge of taking apart everyday household items.  The big hits today were a retired printer from the library, the Keurig machine, a bubble machine and our infamous sewing machine.  The sewing machine is giving our experts quite a challenge in deconstruction! On the list for next time; a toaster, a cassette player (“What’s that?”)  and of course, the sewing machine. Thank you to all of our generous patrons that donate their gently loved household items for our on going project! 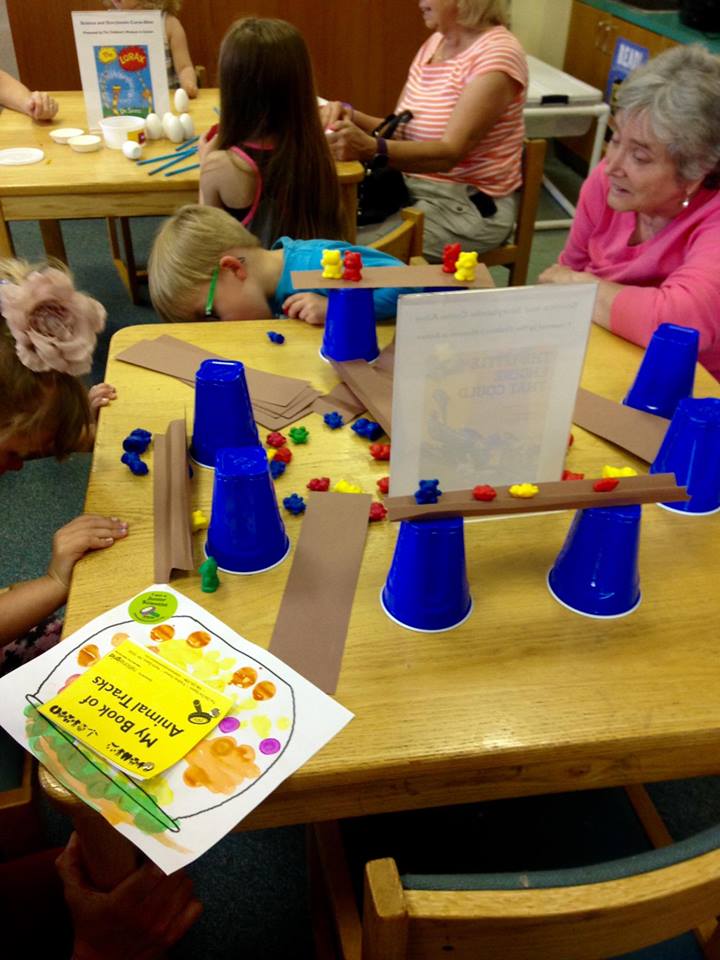 Today our younger scientists learned, with the help of the Children’s Museum in Easton, that Science can be found all around us.  While reading some of our favorite books like “The Lorax” by Dr. Seuss, our friends were able to incorporate new science concepts into their crafts and games to see that science can be hiding in the least expected places- even books!

Director Ellen Snoeyenbos and some of the student-makers that have used our 3D Digital Printer recently visited the Cape Cod Mini Maker Fair to showcase some of the amazing items that have been made here at the WBPL! Not only were the students able to show their creations to others, they were also able to check out other projects and come back with some great ideas for future programs.

Director Ellen Snoeyenbos has led almost twenty 3D Digital Printer workshops on Wednesdays since receiving the LSTA grant!  The students have designed jewelry, ornaments, small toys, chess pieces and the newest project- a nightlight with a photo image of the student’s choice.  Check out some of the items that have been made. If you are interested in creating your own masterpiece, feel free to sign up for the next class!